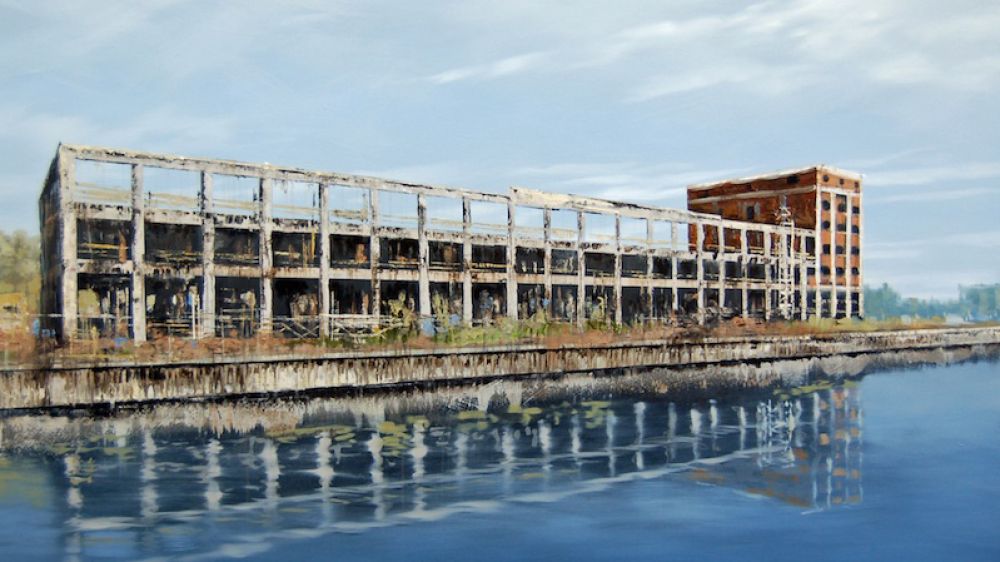 Since 2006, he has undertaken an exploration of the subject of the construction of buildings in painting, an exercise of experimentation and variation on the same theme. He is attracted by the numerous similarities existing between the construction of a building and the creation of a painting on the canvas.

The artist invites us to share a new vision, an other questioning on construction, on the beauty of a tourmented sky, on the nuances and shades of materials and on the architectural erection. It is in a way a pictorial attempt to build in our spirits another image of the urbanity and the place of the Human in the city.

Indeed, his researches highlight our daily environment in movement, the presence, as well as the metamorphosis of which we tend to forget the existence.

The construction site under construction will become a building and will eventually take place in the landscape to modify the aspect of it. In the same way the artist paints a railway car of ballast, not only he reminds us that " the object " belongs to our landscape, and that as such it is worthy of interest, but he also shows us by the marks of rusts (enhanced by the drippings of paintings that the artist has done on the canvas) that this "object" is evolving, undergoing the climate and the time passing.

There is, in Patrick Bastardoz’s work, an evocation of the time passing, its impact on the buildings and on the objects. It’s a painting which is divested of human tracks. We feel the will there to describe a feeling of abandonment and desertion, because we finally don’t know if the constructions are always in progress, or if they have been stopped for several years. As well, the railway cars which are on sidings are out of work, corroded by rust, but they may probably run.

Finally, a work full of latency state and where time has stopped, the spectator of the paintings to decide on the future scenario.

Solo show - September 2016 at the gallery